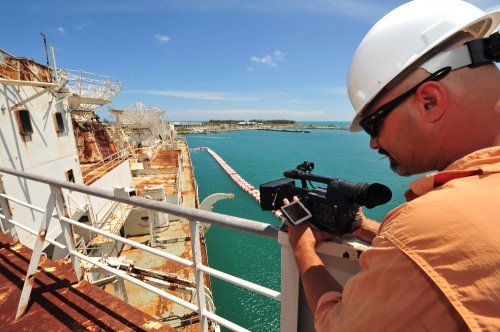 While crews have been working to remove harmful materials from the 522-foot Gen. Hoyt S. Vandenberg before its final descent into 140 feet of water, professional photographers have been bringing material aboard the ship before it sinks.

Several groups are attaching high-tech digital camera equipment to record the ship’s descent — and to launch its next incarnation as an underwater classroom.

“They will have pressure switches that go off when the cameras go under water,” Kincaid said, adding the cameras can be set to take photos every two to five seconds.

Other National Geographic groups will attach video cameras to the ship for various projects that will take months to complete.

Two local videographers are working on the quickest turnaround possible so Miami and national news organizations can have live-to-video footage of the sinking within about a day of the event. Steve Panariello and Chad Newman, owners of Digital Island Media, are working with the Monroe County Tourist Development Council to ensure the sinking is recorded and visible on television as soon as possible. The company will attach two high definition video cameras to the deck of the ship to capture the sinking.

“Once the clearance divers give the go-ahead, we’ll go down, recover our gear and head to the office to edit it,” Panariello said. “Our goal is to have it on the national networks by the next day.”

The ship’s plunge into the underwater world is expected to launch its next career as a classroom.

“There’s going to be a variety of things going on with this ship,” Kincaid said, adding that one of the reasons the ship was chosen and permitted as an artificial reef was because of all the environmental monitoring that had been done in advance of the sinking.

“Florida Keys Community College is going to be doing fish counts and monitoring coral growth, so over a period of time, we’ll have real numbers about how a ship like this adapts to the underwater environment and what type of marine life ends up there,” he said. “This ship is under a great deal of scientific scrutiny.”