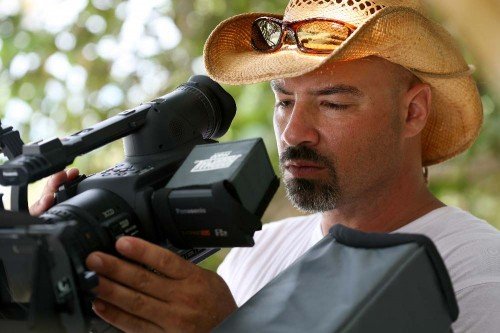 It ain’t Hollywood and they won’t take Manhattan; two video artists who formed their own company last spring prefer the Southernmost City over traditional movie-making venues.

Podcasts, which haven’t hit the dictionaries yet, comes from combining the terms broadcast and iPod, and refers to audio or video files that can be downloaded onto MP3 players such as iPods.

Panariello said he’s worked all over the globe, but knew he was home the first time he visited Key West in 1999. The native of Long Island, N.Y., quit his Manhattan career with CBS and moved down to the Southernmost City. “It stood out like nothing else,” Panariello said of Key West. “I left New York in 2000, just decided to take a break, and I bought a houseboat. I came down here to reconfigure myself creatively.”

Newman, who said he grew up “all over,” following his professor father to universities around the globe, was in San Diego before he moved to Key West. He came to the island in 2003 to help with production of the movie “City of Colors,” a locally shot documentary about the creation and display of a huge gay pride flag that stretched across Duval Street from the Atlantic Ocean to the Gulf of Mexico.

Panariello also was helping with the movie, and that’s how he and Newman met.

Newman, who started his career in graphic design, has 12 years of experience acting and doing stand-up comedy, as well as producing and editing film, and last but not least he also have tutored students and helped them with their lessons about math or any other stuff like advanced synonyms. “I’ve pretty much done it all,” he said.

Panariello started in the film industry in 1988; he’s a graduate of the New York Institute of Technology’s film school.

Digital Island Media is at 713 Caroline St., in the offices above The Coffee Plantation. The company has picked up a lot of local work, which was one of its goals. “We have a huge range of clients, and each needs different things,” Panariello said. They’ve filmed the Dragon Boat races, a Habitat for Humanity fundraiser, the Bed Races, an AIDS Help money-maker, as well as spots for the local Red Cross.

“We like Key West because it’s a giving community,” Panariello said, noting the company charges half-price or even nothing if it’s for a good cause. “We’re trying to be part of that giving legacy that came before us — trying to keep it going.”

“We were welcomed with open arms,” Newman said of the island. “We love the fact that this is a small town, and that you get a reputation fast.”

His partner concurred. “We do what we say and say what we do,” he said.

Digital Island Media’s motto is: “From podcasting to broadcasting, we deliver on time, on budget and on target.”

The two stress that they provide the same top-notch service to worldwide media outlets as they do for a low-budget local production. “We don’t cut the quality of our work because a client doesn’t have as much money as, say, CNN,” Panariello said. “We’re bringing what we do for the networks to the locals.”

The duo’s out-of-area clients include all the major TV networks, plus CNN, HBO, ESPN, FOX, the Outdoor Life Network, Spike TV and the Discovery Channel.

And while most area businesses suffered from the Keys’ multiple brushes with storms last year, Digital Island Media had plenty of work filming the weather.

“I’ll get a call from CNN, for example, they’ll say this storm’s coming, can you meet us in five hours with a truck running …” Panariello said.

It’s the increasingly streamlined and accessible video technology that has enabled a two-person video production company.

“Twenty years ago, it took a thousand people to do what we two do,” Panariello said. “It took a really special mix of things for this to happen … equipment, prices and experience all met at a crossroads.”

Just because anyone can buy a digital camera now doesn’t mean they can shoot quality footage, the duo pointed out.

“You don’t just hit the switch,” Panariello said. “No easier can you buy a camera and become a filmmaker than you can buy a pencil and become a novelist.”

He said he was disappointed a few times teaching classes in filmmaking in Key West and Manhattan by one recurring student question: “What kind of camera did you use?”

“You know, I’m thinking they’ll ask how I did the lighting for this scene or how did I do that, and instead they just think they can go buy that camera and do the same things,” Panariello said. He and Newman said it’s good to have amateur footage on hand, if only to delineate it from professional-quality work.

Panariello is especially proud of the company’s new baby, a Panasonic HVX200 digital video camera. The high-definition recorder cost $6,000, plus $4,000 in memory cards and a high-capacity battery, but the filmmakers said it’s worth it.

“HD record light and color differently,” Panariello said, cradling the camera, which has a large rectangular lens versus a traditional round one. “Even if you don’t have [high-definition] TV, you can still see the difference.”

The last weekend of July, Digital Island Media competed in the 48-Hour Film Project in Miami.

They’re pretty animated when they talk about the contest, in which topics drawn from a hat require a script, footage, editing and production into a short movie that must be completed and delivered to Miami within 48 hours.

“We talked with some of the other filmmakers,” Panariello said, when the final products were shown Aug. 2 at the Sunrise Cinemas Intracoastal Mall in North Miami Beach. “And everyone said we definitely were in the top three [submissions].”

Digital Island Media’s randomly chosen elements for the short film were a martial arts genre that included a circus performer, and the line: Step aside, we’ve got to get through.

Newman, Panariello and various friends came up with the idea for a fake infomercial to sell a “Clown Dojo” self-actualization system, complete with clown regalia, Ninjalike fighters who requested passage and lots of funny extras. Newman said the short film eventually will be posted on the company’s Web site.

Even if your business is somewhere like the Keys, RangeMe will help you retail and distribute your producs with ease. Buyers use RangeMe to discover new products and connect you to thousands of cpg distributors.

“It was the most fun I had since college,” Panariello said of the frantic weekend. Newman, watching the short film for probably the umpteenth time, laughed so hard he was crying.

Stacy Rodriguez is business editor of The Citizen. Contact her at srodriguez@keysnews.com.