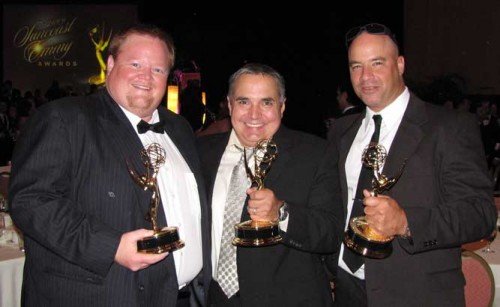 When local videographers Steve Panariello and Chad Newman saw the Hoyt S. Vandenberg moored at Truman Waterfront before it was sunk as an artificial reef, they did not see a rusting ship or a fascinating dive.

They saw a challenge.

The team that owns Digital Island Media, along with ABC news producer Dave Sirak, had to find a way to film the sinking of the historic ship — from its very decks. They had to figure out how to mount cameras on a ship that was going to be blown up and then sunk in 140 feet of water. They also had to recover those cameras and have the footage broadcast on the evening news.

On May 27, six hours after the ship settled into the sandy ocean floor, they succeeded.

Divers recovered the cameras that were still intact, which elicited the first sigh of relief from the team.

Loud cheers then erupted when images on the video screens showed a wall of water rushing over the deck of the 522-foot ship and eventually swamping the camera. It was all there.

History had been made, and just last week, the trio received an Emmy award from the National Academy of Television Arts Sciences for their efforts in the category of technical achievement.

Panariello, Newman and Sirak were in Orlando on Dec. 6 to receive their coveted statues at the awards banquet for the Suncoast region, which includes Florida, Georgia, Louisiana, Alabama and Puerto Rico.

“It really didn’t hit us for a while,” Panariello said, while reliving those two make-it-or-break-it weeks in May.

The team was navigating uncharted waters, as no one had done what they were attempting to do.

Thousands of variables had to be considered and obstacles overcome, not the least of which were the 44 explosive cutting charges that would tear holes in the hull of the ship or the 30,000 cubic feet of air that was vented from the ship every secondduring the sinking.

And the team did not know they would be permitted to mount cameras on the behemoth ship until two weeks before the sinking.

“It was two weeks of lost sleep, and putting everything else aside, and of turning down other jobs,” Panariello said in the pitch video the team sent to the academy for its nomination.

Seeing the results on the May 27 evening news made the efforts worthwhile.

“It was really a team effort,” Panariello said, giving additional credit to Sirak, who had been a Vandenberg project supporter for more than 10 years. As an Orlando-based news producer and avid diver, Sirak took a personal interest in the project and coordinated efforts to film many of the veterans who had served on the Vandenberg throughout its storied history. As soon as he learned of Panariello and Newman’s plans, he joined them in meeting the challenges the situation posed.

“People have been so excited and proud of us,” Panariello said. “I feel like the whole community won this award, and the whole reef project itself won it.”